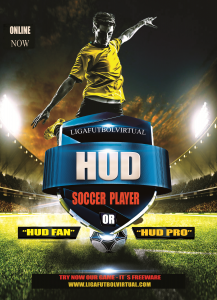 It’s online since today a new HUD version that fix all kind of bugs found during the last year and half. Thank you to all testers / players and suggestions had during this period.

Let’s see on specific what changed since last update:

– Sprint: completely fixed! Finally we got a stable version that fix all kid of issue on sprinting mode.
– Throw in: only with hands, bug fixed. On the past and with the last modifies, it was possible make lateral throw-in with foots with E and C buttons
– E button: removed the button for shoot. Now it’s only possible shoot with left mouse. This modify is necessary for SL limitations, becasue it was impossible use the E and C for spin shoot. We returned at original implementation, allowing only shoot with left mouse, and in this way, it’s possible make a combination left mouse + C or left mouse + E for spin shoots
– Fouls: now, also in training mode, with a slide from behind, fouls system is activated!
– Fly or speed alert: the system checks also in training mode if you are flying on ground or if you are using some speed script (also with Fan HUD)
– HUD connected to LFV server: It is certainly the most important change even if it does not concern the gameplay: now the HUD is connected to our server. This means that in case of new HUD versions, wearing the 3.0.6.6, the update will be automatically notified, and the new version will be delivered directly to the avatar. No more necessary go to LFV field and click the dispenser to take new versions.

These were the significant and, finally, definitive changes to the game, to make sure to offer a complete and realistic HUD. I personally thank all the people who tried it and gave valuable tips to get this product and this stable version.

I always highly recommend using the latest version of LFV if you want to play football, older versions may be less performing if you play against an user running version 3.0.6.6. So, delete all the old versions you have, and run to get the new one!

There are also other changes to the Gamemaster, expecially to allow the memory saving. Now it seems it runs online for months, and there isn’t anymore out of memory. This is a very important factor. I reduced at 50% the memory using, so probably the issue is gone. The Gamemaster is not final in final version, there may still be improvements, but there will be no work for this year or in future, Practice mode is working very good. Little bugs discovered only on Match mode.

There is a little fix on the ball too, now in case of a slide from a player to catch the ball, tests said that it’s more harder that the ball goes under the ground. It’s still to be a SL general problem of prims collisions, but I tried to fix a bit this issue. Anyway, the slide isn’t used by advanced players, they have the button C to catch the ball, and they don’t press the C for a slide, so it’s a minor issue.